HALLOWEEN III: SEASON OF THE WITCH

In the tradition of BEYOND THE VALLEY OF THE DOLLS and TROLL 2 (sequels that have absolutely nothing to do with the original), comes HALLOWEEN III: SEASON OF THE WITCH (1982, Directed by Tommy Lee Wallace) a sci-fi / horror film and the third installment in the popular HALLOWEEN series - but intended to be the first in an annual anthology series, releasing a new storyline every year around Halloween. 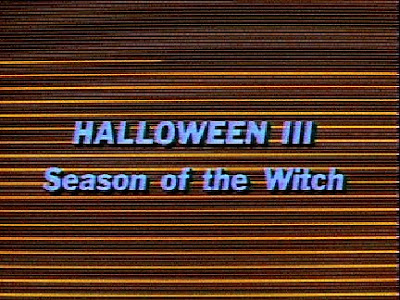 So rather that continue the story of madman slasher Michael Myers, this oddball entry focuses on an evil scheme by the wacky owner of the Silver Shamrock Halloween mask company to pull a giant prank on Halloween night by controlling all of America's children through a trio of masks - a witch face, a pumpkin head, and a skull. The only mention of the previous HALLOWEEN films a scene where the trailer for the original film is seen on a TV set. 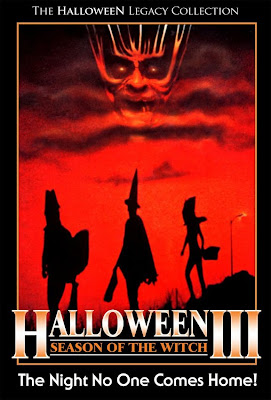 The story goes like this: a week before Halloween, a costume shop owner named Harry is being stalked by gang of dudes wearing business suits. Harry seeks shelter at a service station, but eventually collapses - in his hand is a Silver Shamrock pumpkin head mask. The gas station attendant transports Harry to hospital. Harry warns him "They're gonna kill us. All of us." 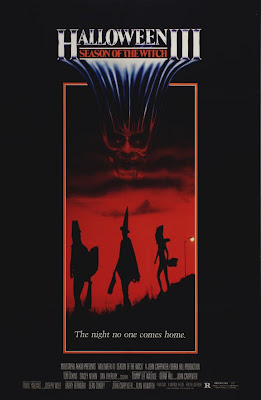 Next we meet Dan Challis, a hard drinking deadbeat dad who is also a brilliant doctor. Harry is hospitalized, but that doesn't last long, because his first visitor rips his head apart, killing him instantly. And it wasn't even visiting hours! 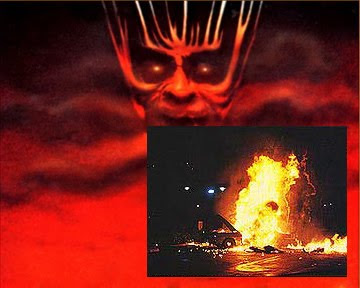 The mystery head-ripper then goes to his car, where he drenches himself with gasoline and explodes. Ka-boom! Enter Harry's young daughter Ellie, who looks like a cross between singers Pat Benatar, Toni Basil and HAPPY DAYS' Joanie Cunningham. Ellie and the dirty doc soon team up to figure out what happened to Harry. Dr. Dan needs a drink. 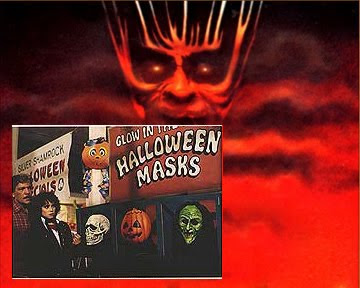 All clues seem to point to Santa Mira, CA, where Harry was last seen. The sleepy town is also the headquarters of the Silver Shamrock Novelty company. Surely Dan is disappointed that there is no happy hour in this town. 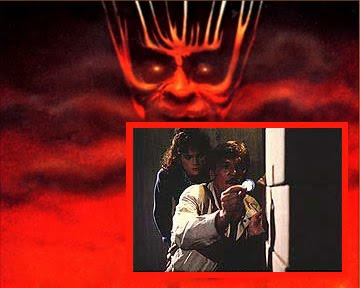 The duo check into the local hotel, where Harry stayed right before he died. When Ellie insists on one room, Dan starts to get ideas about her. 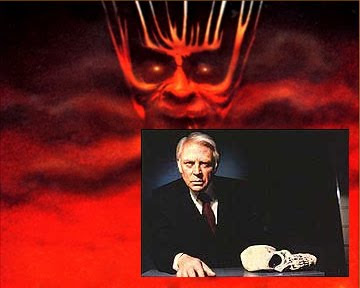 They soon learn Conal Cochran (who I swore they called "Colonel Cockring" ) and his mask factory are the sole source of income for Santa Mira. Meanwhile, booze hound Dan keeps calling his flirty Shelly Long lookalike friend who works in the hospital morgue to check if she's found anything the the ashes of the exploded car. This happens about three times. 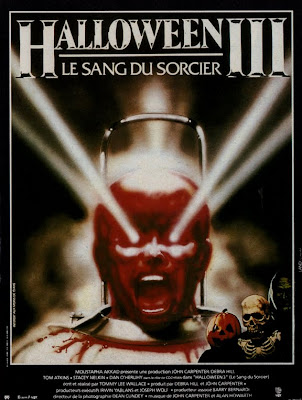 Suddenly the movie becomes NATIONAL LAMPOON'S HALLOWEEN when we meet the other guests of the hotel: loudmouth Marge Guttman and the Buddy and Betty Kupfer and their son Little Buddy. They are all there to order new masks for Halloween - which is now only days away!!!Later, Dan and Ellie have sex. Ewwwww. 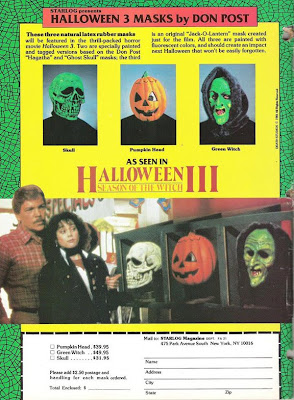 The next day, the group gets a tour the Silver Shamrock factory and meet Mr. Burns, er Col. Cockring, er Cochran. 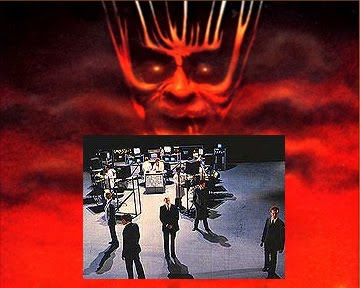 All of Mr. C's workers seem to be young white men dressed in suits. Turns out Harry's car is being stored in the basement of the factory. 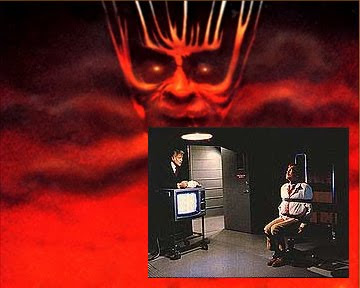 After Ellie is kidnapped by the men in suits, Dan sneaks into the factory, where he learns that Mr. C.'s henchmen are actually robots! What? Soon Dan is captured too and Mr. C. reveals that the Silver Shamrock logo on the inside of the rubber masks contain a device that is powered by a crumb of Stonehenge! Seriously. 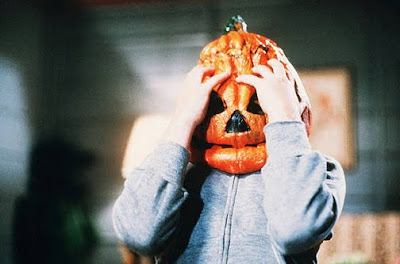 When final Silver Shamrock TV commercial airs simultaneously on all three networks on Halloween, the device will activate, causing the childrens' heads to dissolve and emitting both crickets and snakes. Happy Halloween!

I don't want to spoil it, but in the end Dan manages to escape, rescue Ellie, and sabotage Mr. C's plans. Lots of things go boom and Halloween is saved from the Grinch. A surprise twist ending causes one to yell "what the fuck?" to the TV screen elevates this flick to an 7 outta 10. My biggest disappointment is that there's no witch anywhere in the film, except for the rubber mask...shouldn't it have been subtitled SEASON OF THE MASK?
Posted by Doug at 12:00 AM

I love this film. So bad it's good, so good it's great!

That damn Silver Shamrock jingle get's stuck in my head every year around this time (thus far, no exploding noggin though).