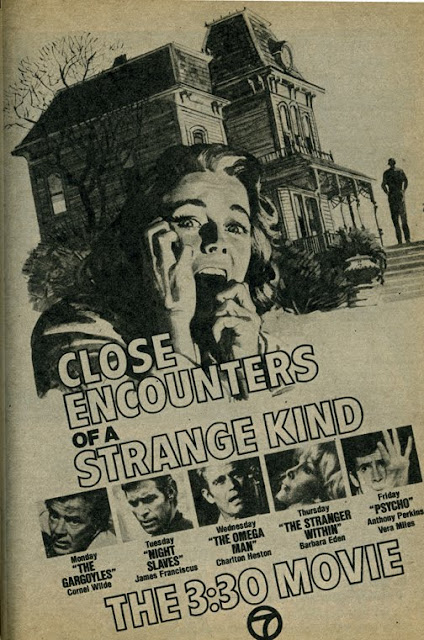 Growing up in New York, we had the WABC 4:30 MOVIE, while folks in L.A. had KABC's 3:30 MOVIE. Same concept, different time, different coast. The 4:30 MOVIE was best known for it's amazing opening titles sequence and it's theme weeks: PLANET OF THE APES week, Super-Hero Week, Disaster Movie Week, Sci-Fi Week, etc. Sure, most were "edited for television" 90-minute condensed versions of two-hour films, but remember this was way before Blu-ray, before DVD, before VHS, before Laser Disc, before BetaMax, before Satellite, before pay-per-view... even before Cable TV. This was the only way to see movies...other then at the movies. They often mixed in TV-movies to make thing interesting. So here's a typical line-up..."Close Encounters of a Strange Kind" week - THE GARGOYLES starring Cornell Wilde, NIGHT SLAVES starring James Franciscus, THE OMEGA MAN starring Charlton Heston, THE STRANGE WITHIN starring Barbara Eden and the one, the only PSYCHO! A 109 minute film, chopped down to 72 minutes to fit a 90-minute time slot? Blasphemy! Wonder how much of the shower scene made it to broadcast.

The best, best theme week was Jacqueline Susann week! "Once is not enough" The Love Machine" and "Valley Of The Dolls", all in the same week. A gay child's dream come true.

As for The 4:30 Movie theme at WABC, it was (contrary to popular legend that had another individual penning it) composed by Walter Raim, who at the time (1968) recorded as the "Walter Raim Concept" on the very short-lived MTA label.