Mickey Rooney is THE MANIPULATOR

Here's a post from 2008 - in honor of the late Mr. Rooney. Ever wonder what it would be like if Sid & Marty Krofft produced Stephen King's MISERY? Well, 1971's THE MANIPULATOR (aka BJ LANG PRESENTS) is a pretty close approximation of what it might look like. 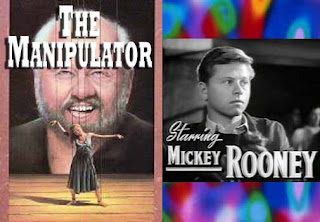 It all starts innocently enough on a rainy night, when we see a dark figure in a hat and raincoat walking on a dark city street accompanied by standard 1970s TV-movie theme music followed by the opening titles "Mickey Rooney...Luana Anders...THE MANIPULATOR". A fancy old car then pulls up to a warehouse and Mickey exits sporting his YEAR WITHOUT A SANTA CLAUS beard. He then gets into a freight elevator as flashes of random Fellini-like horrors begin. This is when we start to know this is no ABC Movie of the Week.

Mickey walks by what looks like a dusty animal carcass and climbs up a ladder into what looks like a Hollywood prop house. He then sits in an old leather chair, takes off his rose-tinted sunglasses and begins talking to himself as if he is various members of a film crew. Okay. He chats with a mannequin named "Wally" in a what could be a scene from ANDY HARDY HAS A COMPLETE MENTAL BREAKDOWN-decides to "put on a show!!!" Too bad Judy wasn't around to help out!

So Mickey begins to describe the upcoming scene to his imaginary "cast & crew". He calls "action!" and turns on a strobe light, imagining a pair of nude elderly actors dancing in the spotlight as he shouts the lyrics to "Chattanooga Choo Choo" at them. Then he showers the naked old folks with flowers. HUH??? 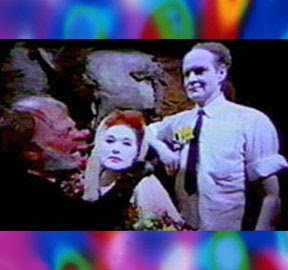 The old people soon disappear, then Mickey pulls back a curtain and screams - and a real woman (Luana Anders) screams back at him. She's his "star", Carlotta - and she's hungry. In fact she asks him for food repeatedly. Turns out she's his prisoner and he has her tied to a wheelchair - and it's time for her lunch! Mickey then feeds her water from a silver chalice and baby food from a jar. Classy.

So then we learn that Carlotta has been cast as Roxanne (the Daryl Hannah role) in BJ Lang's film version of CYRANO DE BERGERAC. While Mickey is feeding her, she bites his finger and tells him that she's grateful for his kindness to her. Then he yells at some "crew members" and rolls in a huge spotlight followed by a (believe it or not) a fast-motion dance with a broomstick intercut with insert shots of a growling wild animal. Very Krofft-like. Meanwhile, Carlotta unties herself. Run like the wind, girl, run!!!

I guess she didn't run cause Mickey then shows up in drag make-up...and whispers to Charlotte about when he used to make up Marilyn's eyes. Then her gets all femme as he applies Carlotta's Roxanne make-up. This is a very disturbing scene. What would Judy say???

Mickey hears some cackling laughter in his head and is now sporting a really fake Witchie-Poo type Cyrano nose. I guess he's the director AND star of this production! Then he pushes Carlotta's wheelchair head-on into a mirror and demands that she recite her lines from the balcony scene. Then he yells at the thunder outside to be "quiet". Huh? 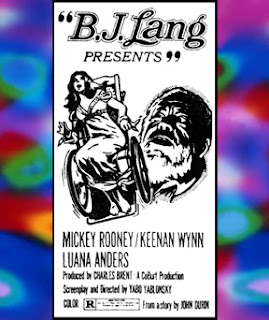 After playing with some color gels, Mickey gives a pep talk to his imaginary background players (actually a collection of broken mannequins). Then he forces Carlotta to act out a scene - he calls "cut!!!" and breaks into another "Chattanooga Choo Choo" performance. Jesus - please make it stop!!! Then he tells her all about "fear" as he pretends to choke her. That's when I decide that ANDY HARDY MUST DIE!!!

So, Mickey calls "action!!!" again and they act out their big scene and unseen crowds roar with applause and "bravos!" Carlotta then tells him that the audience LOVES him. What follows next is the most bizarre scene in the film - We see a naked baby walking around a cocktail party where we also see the usual assortment of late 60s/early 70s "freaks" - you know - nudists, drag queens, Ruth Gordon-type old ladies, more nudists, pot-smokers, hippies, sex maniacs and others eating Saltine crackers with spinach dip and tripping out on acid. This all culminates with a giant orgy where Mickey is caressed by both women and men...and the naked baby is in the middle of it all!!! Really...I ask again...WHAT would Judy say???

While preparing for his big "duel" scene, Mickey suddenly collapses and Carlotta begs him NOT to die. Huh? She gets herself free and begins kicking the shit out of him. Why doesn't she just RUN??? Of course he manages to pin her down and kiss her! What a MANIPULATOR! Carlotta then begins running in very slow motion down a looooonnnnnggggg hallway while crazy electronic special effects music plays. Soon Mickey leaps out at her with his Cyrano sword. She decides to hide behind some sheer curtains. Smart girl, that Carlotta.

Then Mickey chases her through the mannequin display - and she attacks him with the spotlight. Carlotta then continues to run through the prop house through what looks like a combo wardrobe department and meat locker. She then crawls around the catwalk as Mickey hollers out orders to his "film crew"...and he once again breaks into song - yes, that's right - "Chattanooga Choo Choo" for the third fucking time!!! I beg of you....Please make it stop...please!!!! I will never listen to that song the same way again. Actually, I will never listen to that song again, PERIOD.

As Carlotta continues to navigate her way through the wardrobe, she suddenly stumbles upon "guest star" character actor Keenan Wynn - who Mickey stabs with his sword and kills. I guess it was just a cameo. Suddenly we're in a slaughterhouse, where a string quartet entertains both women in furs and butchers wearing bloody aprons as Carlotta dances for them all. I just can't say "huh?" anymore - I'm totally exhausted.

Mickey tells Carlotta he'll let her go if she tells him that she loves him. She doesn't - but he lets her go anyway. Okay, HUH? She then runs through the damn wardrobe again!!! She climbs down the ladder into the freight elevator...but she can't figure out how to open the door - so she just slams herself against the walls till it opens. Oh my god...I can't take much more of this.

Finally - Carlotta runs out into the rain - and locks herself in his car!!! She starts blowing the horn as Mickey pounds on the car windows - finally smashing the window with a trash can. He unlocks the door. Fade to: she's back inside with him. They kiss - and she laughs. This drives him CRAZY. I mean REALLY CRAZY. Then everyTHING around him begins to laugh. Mannequins, dead animals, boxes, jars of Vicks VapoRub, Chia Pets, etc. Then she starts yelling "No!!! No!!! No!!!" at him and he recites the final lines from CYRANO - and she actually looks at him... LOVINGLY!!!

Then he stabs himself with the sword and dies. She hears applause and takes a bow. The End. After the end credits we see Mickey's sped-up dance with the broom again. I almost expected Pufnstuf to show up and join in. The End for real.

Holy Shit! I really think Mickey thought he was gonna get an Oscar for this "brave" film role. I'm just surprised he ever worked again after it!!! This movie needs to be seen just to show how an actor's ego can lead to bad film choices. I do have to say that Luana Anders was truly compelling as Carlotta - and I look forward to seeing some of her other films. Sadly, she passed away in 1996.