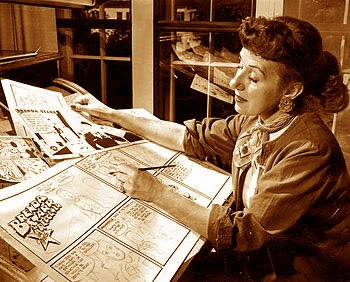 Brenda Starr, Reporter was always one of my favorite comic strips. Its creator, Dale Messick, was a woman in a world of full of men - much like her creation. The strip has been running continuously since June 30, 1940. 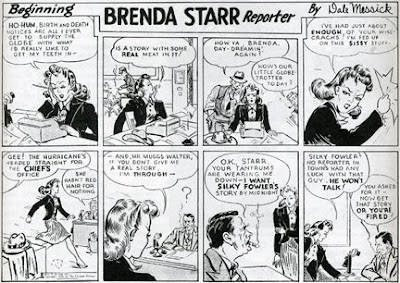 The character of Brenda Starr is a newspaper woman who works for The Flash. Her soap opera-style strip chronicled both her exotic career and her steamy love life - sometimes at the same time! This pulp fiction fashionista always had the right outfit for the right adventure, and paper dolls were often featured in the Sunday edition.

Brenda Starr is a a totally modern woman - smart, glamorous and determined. 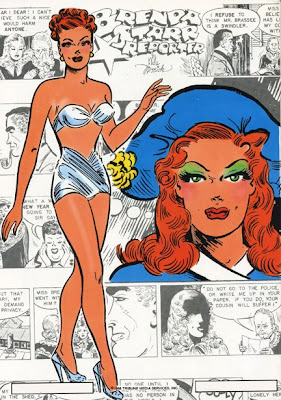 Brenda has traveled the world solving mysteries, unearthing scoops and breaking the heart of almost every man she encounters. 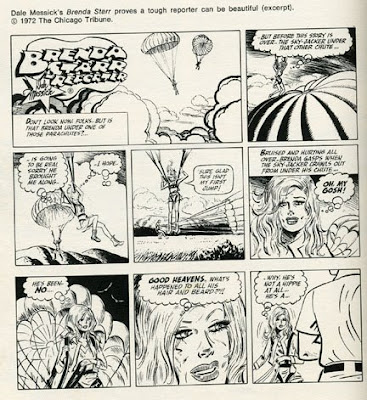 Her mysterious beau was named Basil St. John — whom she eventually married in 1976. 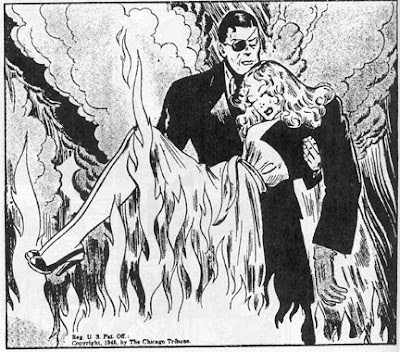 Basil is tall, dark and handsome and sports an eye patch. Much of Basil’s life is consumed by the search for a cure for his deadly illness, which can be extracted from the rare black orchid. 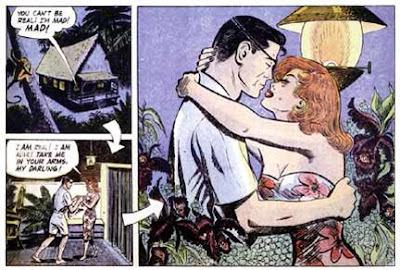 Brenda had Basil's baby. The child was a girl - and she was wincingly named Starr Twinkle St. John. This precocious youngster was also lost to Brenda when a plane went down in a jungle, carrying both Basil and Starr Twinkle. Starr Twinkle subsequently reappeared in the comic strip. After few years, Brenda and Basil were reunited, and then divorced, but fate could not keep them apart. Later, Brenda discovered Basil had a son, named Sage, whose mother was revealed to be Brenda's friend,  talk show host Wanda Fonda!

While Brenda's supporting cast has changed over the years, several key players have remained: 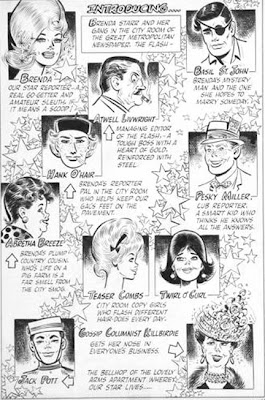 Mr. Livwright is the blustering, cigar-chomping managing editor of The Flash. 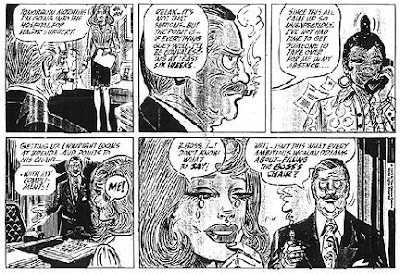 He's stubborn, often at odds with Hank and Brenda, though he admires their uncanny journalistic abilities. 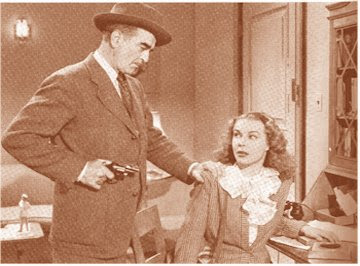 Brenda Starr, Reporter started out as a weekly Sunday strip, but expanded to daily in 1945 in conjunction with the release of the Columbia Pictures released a serial, BRENDA STARR, REPORTER with Joan Woodbury in the title role. 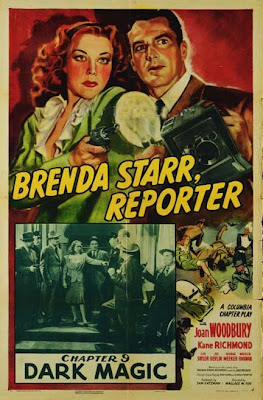 Over 30 years later, Brenda was ready for primetime, but maybe not so much. 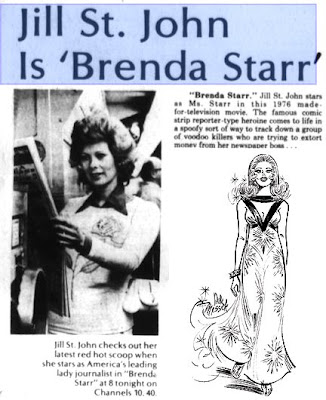 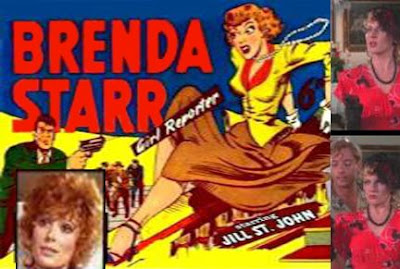 This was a pilot for a series that never happened. 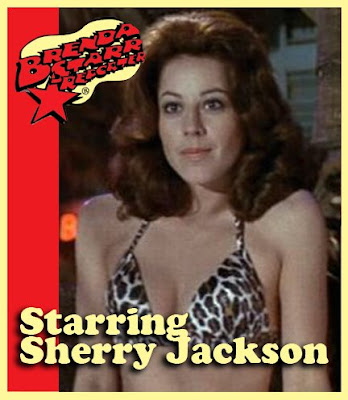 A second pilot, BRENDA STARR, starring the sexy, sultry Sherry Jackson was produced for syndication in 1979. Sadly, this also never made it to series. 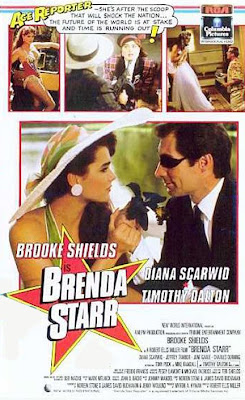 A feature film, BRENDA STARR, was produced in 1988, but released in the US on April 15, 1992 with Brooke Shields in the title role and Timothy (James Bond) Dalton as Basil. 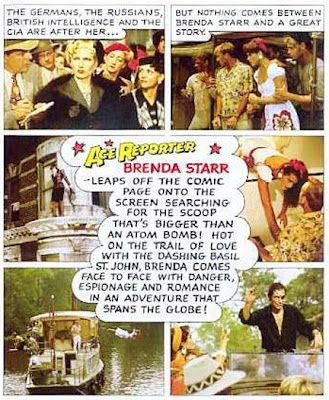 Believe it or not, I've never seen this film. Maybe someday soon? 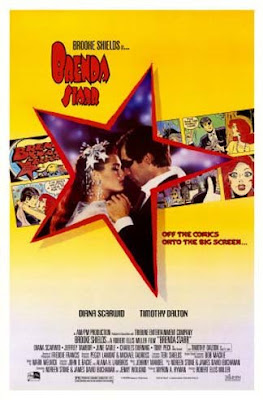 Leaping from the funny pages into the world of four color comics is often a unsuccessful road taken by comic strip characters. 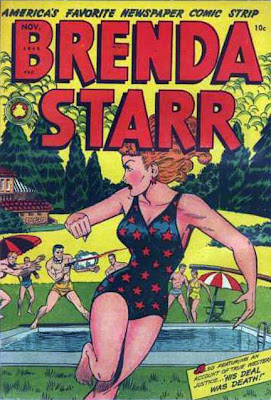 Brenda headlined her own comic book series from Superior Comics (1948-49), 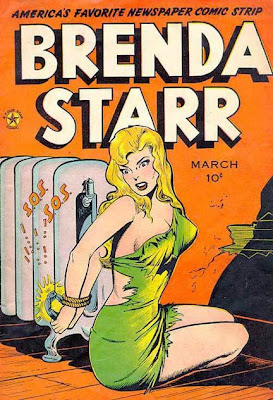 a Charlton revival followed in 1955 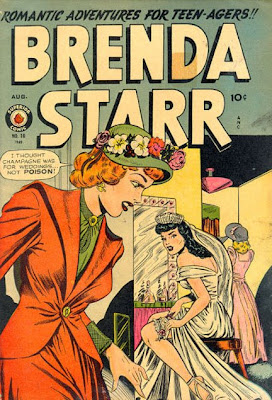 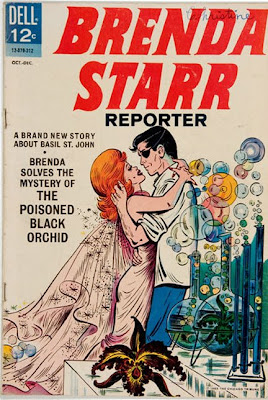 A Big Little Book also supposedly exists, though I have never actually seen it myself.

Reprints of rare early strips and comics were made available in the 1980s. 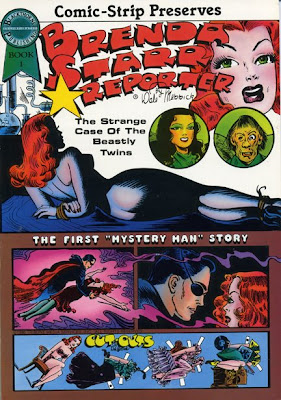 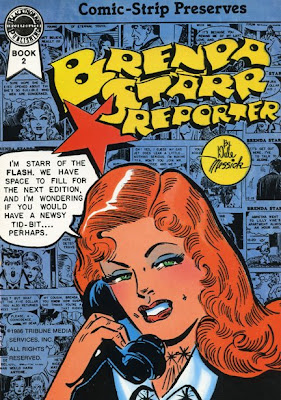 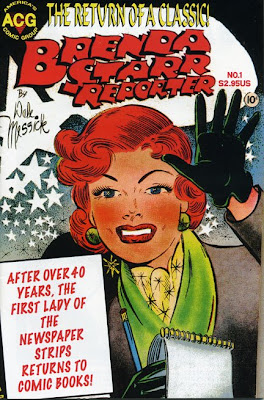 You may still be able to find these at your local comics shop. 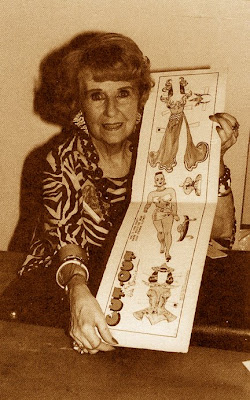 Dale Messick retired from drawing in 1980, only to be replaced by the great Ramona Fradon, who previously drew many of my favorite DC Comics' titles, including Aquaman, Plastic Man, Super Friends and The Freedom Fighters.

When Ramona Fradon retired in 1995, she was followed by Linda Sutter and June Brigman. Brigman's credits include Power Pack for Marvel Comics and Supergirl for DC. Here's a recent Sunday strip: 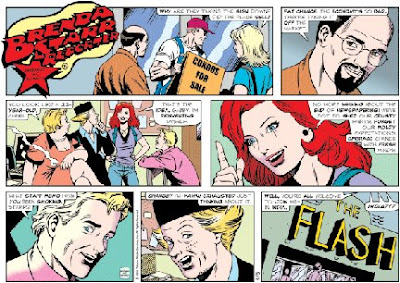 The strip's current writer is Mary Schmich, who is also a columnist at the Chicago Tribune. June Brigman continues as the artist. 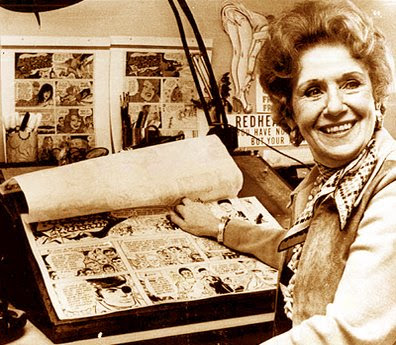 The wonderful Ms. Messick received the National Cartoonists Society's Story Comic Book Award in 1975 and the Milton Caniff Lifetime Achievement Award in 1997 for her work on Brenda Starr. Dale Messick passed away in 2005 at the age of 99! 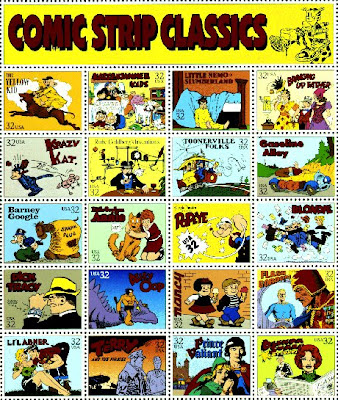 In 1995, Brenda Starr one of 20 famous characters included in the "Comic Strip Classics" series of U.S. postage stamps. 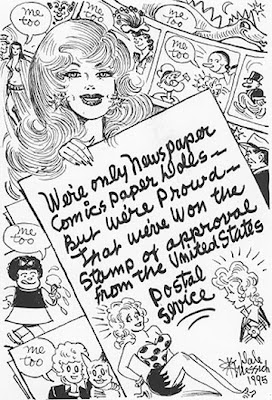 How could anyone NOT  love Brenda Starr, Reporter? 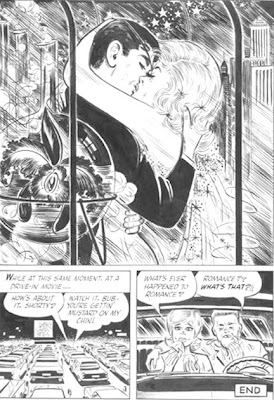 This is another outstanding piece by you. I don't know much about the comic strip, but now I want to run right out and research it to death, as I always do with things that I know I would like.

The Brenda Starr movie has Diana Scarwid in it, who is one of my favorite actresses...might check it out for that alone.

Whatever happened to Starr Twinkle? I last remember her as a punk-looking teen, but didn't follow the strip much for a long time. Can someone fill me in with her story?

You just brought back great memories from my childhood...my idols were Brenda Starr and Honey West! Since I am a natural redhead, I "became" Brenda in many escapades of my youth. Now a little older and wiser, I still enjoy Brenda's vibrant personality and try to mix it with my own. BTW, Brooke Shields as Brenda? She couldn't hold a candle to her.