Originally posted in 2008. Despite his recent nutty attacks on on our "socialist" President, here's my tribute to the late Andy Williams. Pop singer Andy Williams is known as "Mr. Christmas," due to unmistakably smooth renditions of on many much-loved holiday standards, specifically The Most Wonderful Time of The Year. But in my opinion, it was his holiday TV shows and specials that solidified this title. 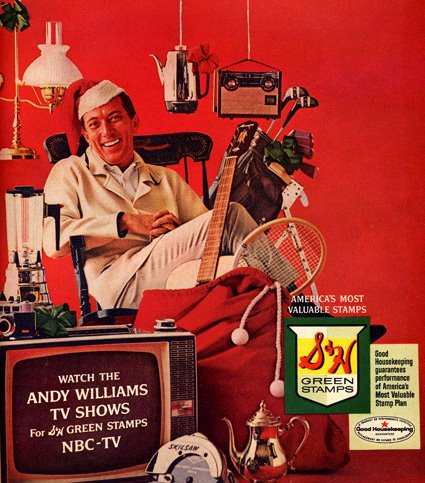 After hosting a short-lived half-hour ABC show in 1958 featuring Dick Van Dyke, this undeniably handsome crooner became the star of his own hour-long weekly CBS show during the summer of 1959. In 1962 NBC awarded him an ongoing series, which ran, more or less until 1971.

While never a Top 20 hit, the show proved very popular no matter what competition it faced. In it's debut season, NBC aired it Thursdays at 10PM, opposite CBS's ALFRED HITCHCOCK PRSENTS. For seasons 2 and 3, the show was moved to Tuesdays at 10PM, alternating with the BELL TELEPHONE HOUR. THE ANDY WILLIAMS SHOW returned to a weekly schedule in 1965, when it was moved to Monday at 9PM-opposite THE ANDY GRIFFITH SHOW, creating the infamous "Battle of the Andys". The show then became part of NBC's Disney-led Sunday night line-up in 1966. 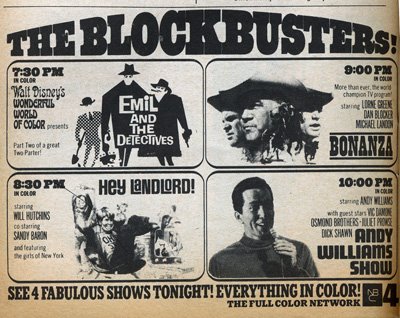 The show took two seasons off and returned on Saturdays at 7:30PM for a final two years. In total, the show went on to win three Emmy Awards for outstanding variety program (1963, 1966 and 1967). While each week was jam-packed with great songs and fabulous production numbers featuring top knotch guest stars, the absolute highlight of each season, of course, was the annual Christmas show. Even after the series ended, through the early 70s, Andy's Christmas specials were among the most popular of the season, setting the tone and format which many others have copied and parodied ever since. 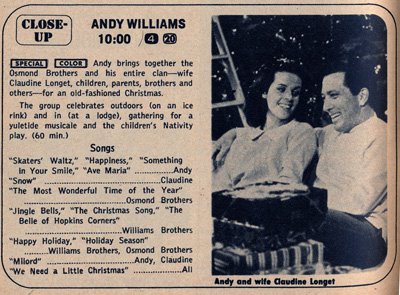 The Osmond Brothers, who Williams "discovered" performing in Disneyland made their TV debut on the 1962 Christmas show, and stayed with Andy for the rest of his run. Andy's wife, the lovely French chanteuse Claudine Longet and their three children, Noelle, Christian, and Robert all appeared on the Christmas shows. For more about Claudine go here. I guess part of what made his holiday shows so special was the appearances by Andy's family, notably his very talented brothers. The visual of these guys singing in harmony wearing matching sweaters has had a profound effect on me over the years. Here's a photo from my annual Christmas shindig: 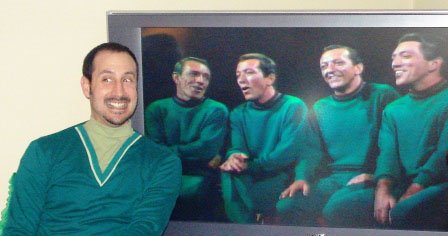 So, when you get the Christmas blues or are sad because you can't afford to buy any gifts for your friends or family this year, just think of Andy's warm, comforting voice and it will bring you back to a time when the TV landscape was littered with so many magical hours of song, dance and cornball comedy. Luckily some of that magic has be captured and is now available on dvd (or on your local PBS station). 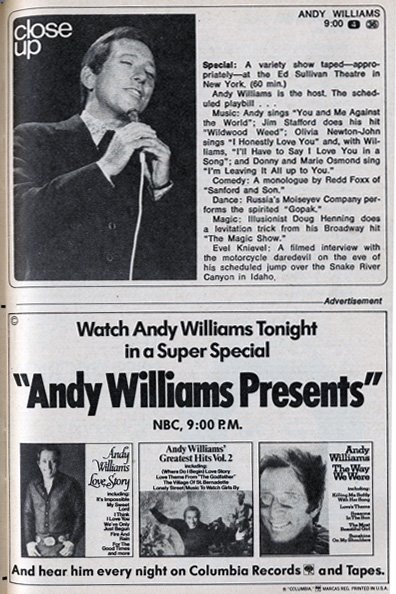 In addition, Williams has recorded eight Christmas albums over the years and has performed in his own theater in Branson, Missouri since 1992. Here a great little (and totally unauthorized) compilation that I came across on YouTube. You can see more clips over at Marc Harshbarger's DEEP DISH.
Posted by Doug at 8:47 AM

Gotta love Andy during the holiday season. The rest of the year not so much. Thanks for the shout-out, Doug! Happy Holidays!

Hurm. Neither your blog nor IMDB says anything about The Andy Williams Show (with Wayland Flowers & Madame) which I saw weekly on TV back around 1976. Was I watching reruns of the series which ended in 1971? It was a low-budget weekly show, not a Christmas special.