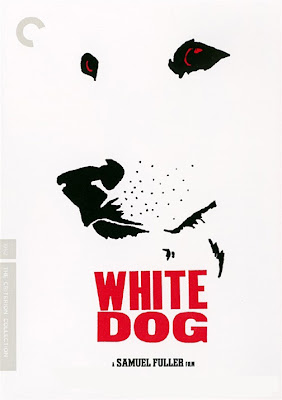 As a dog lover and supporter of animal rights, WHITE DOG (1982, directed by the great Sam Fuller) is a film that has always intrigued me. 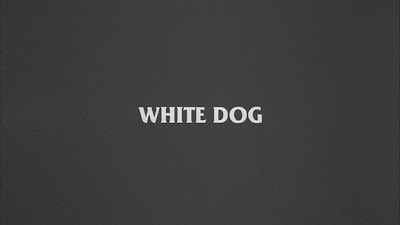 As a birthday tribute to Kristy McNichol, I decided it was time I saw the controversial classic film. The drama starts when actress Julie Sawyer (Kristy) accidentally hits a beautiful stray white German Shepherd with her car. 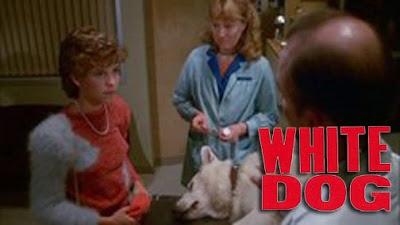 She takes the dog to a local vet and rather than drop him off at the shelter, she decides to take him in until his rightful owners claim him.

The nameless dog seems sweet and protective at first. Julie's boyfriend (Jameson Parker) is glad she's not alone in her Hollywood Hills house any longer. That very night an intruder breaks in Julie's house and tries to rape her. 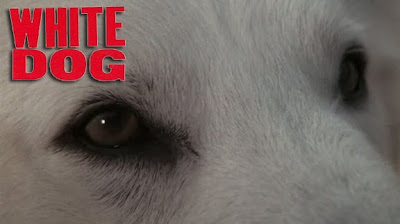 The dog is watching a loud war movie in the other room (seriously) and doesn't hear the criminal. Luckily during a commercial break, the dog finally hears the commotion and leaps to Julie's protection, effectively kicking the shit out of the bad guy. 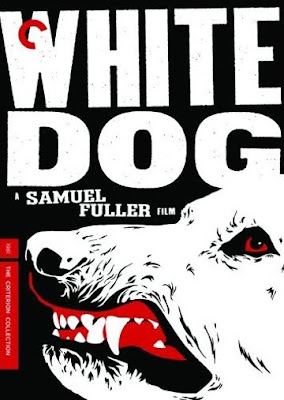 Days later, the dog–still nameless–wanders off after spotting a rabbit. Julie visits the local animal shelter and in a very powerful scene is disturbed by the conditions there and the use of killing ovens used to put dogs "to sleep". The dog eventually returns her, all bloody from attacking a truck driver. 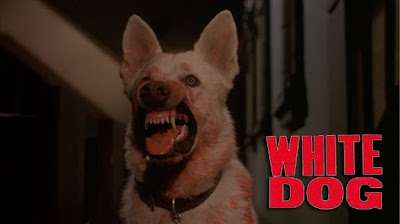 After cleaning him up, Julie takes her boy to work with her and ties him up in the soundstage where she is shooting a scene with an African American actress (Lynne Moody). 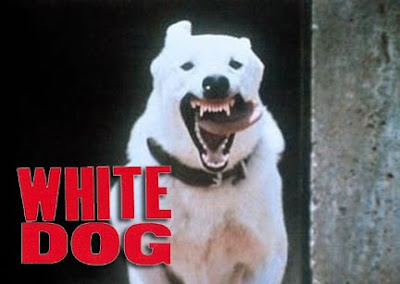 From out of nowhere the dog brutally attacks her costar, hospitalizing her and sending Julie to a sanctuary for theatrical animals called Noah's Ark to seek help. 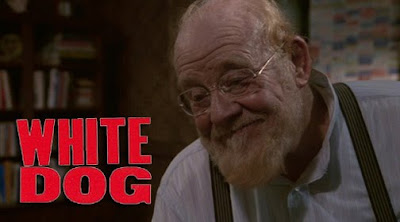 Once there she begs Mr. Carruthers (Burl Ives) to help deprogram her attack dog, but he insists it is not possible. Suddenly the dog mauls one of Carruther's workers, an African American man. At this point we learn that the animal is a "white dog" - who was trained from birth to attack people of color! 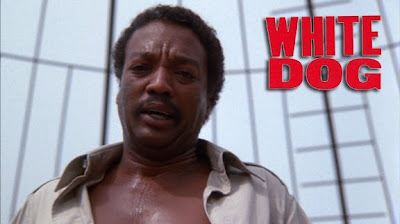 Carruther's top trainer, Keys (the wonderful Paul Winfield) has faced these kinds of dogs before and believes he can break the dog out of it's racist training and takes it on as a personal challenge. Julie agrees to this because she loves the dog, even though she still hasn't given it a name!!! 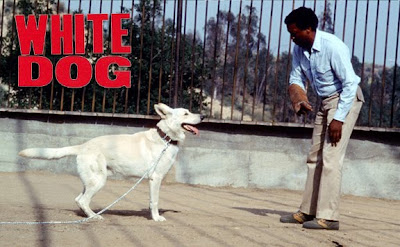 "Dr. Jekyl" resists Key's training methods at first, and eventually manages to escape from the facility and lives on the streets. 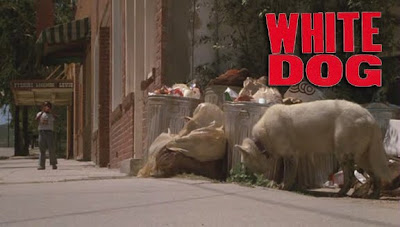 In a terrifying scene a small black child is seen playing on a sidewalk while the dog is sifting through garbage just around the corner, luckily the child's mother removes him from harm before the dog is even aware of his existence. 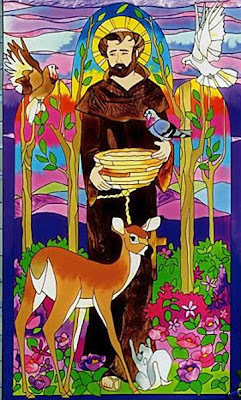 An adult churchgoer isn't so lucky as the dog spots him and chases him into the church of St. Francis Assissi, where he rips the man to shreads. 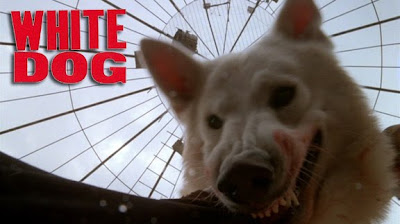 Keys discovers the murdered man and resolves to cure the dog, even though Julie now thinks that "Mr. Hyde" cannot be saved. Keys commits to making headway with the dog, and finally does. (Apparently Mr. Winfield insisted on doing all his own stunts.) 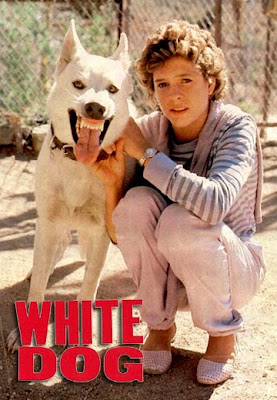 Suddenly the dog's original owner shows up a Julie's door, turns out he's an overweight middle-aged man from a trailer park with two freckle-faced little daughters, and he looks very much like Carruthers. In the best scene of the film, Julie lays into guy and calls him just about every name in the book except "racist motherfucker", which is what I would have called him. 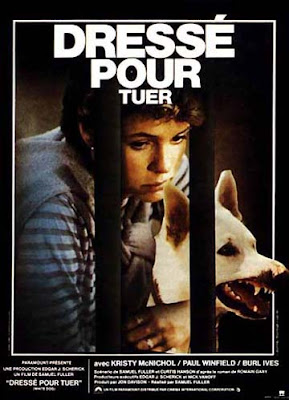 When Julie arrives at the compound, she is stunned by the dog's improvement as he is kind with both Keys and another black man. Then there's a shock ending which can be interpreted two ways. 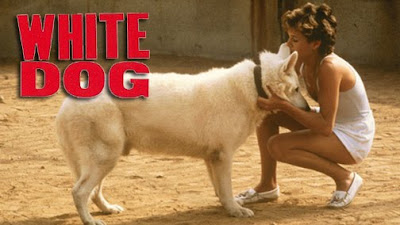 SPOILER ALERT!!! After accepting Keys, the dog spots Mr. Carruthers and leaps towards him. Keys shoots the dog dead. So, are we to believe that the dog now hates white people OR does he think Carruthers is his original, abusive owner? I just think the dog is pissed off because he doesn't have a name. 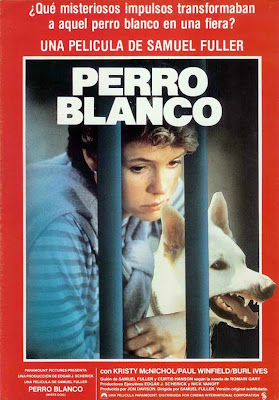 This is a great film. While some of the dialogue is a bit cheesy and Kristy's wardrobe is dated and laughable, the story is as powerful and thought-provoking as it was when it was first made. 10 outta 10. See it. 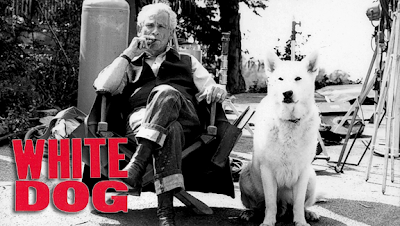 Pictured: Director Sam Fuller and "White Dog".
Posted by Doug at 12:18 AM

Fantastic review, finally replaced my 15 year old bootleg VHS for the Criterion DVD. I thought between this and dreamlover KM might have a adult career but I guess I was wrong.

Were do these movies come from? Your incredible review makes this movie seem almost surreal. Now I gotta see it! Thanks Doug, I love you movie review, I don;t always comment (speechless) but I love them all!