Thanks for Tooning In (Again)

Everybody has seen A CHARLIE BROWN THANKSGIVING at least once. While not as popular as the other Peanuts holiday specials, it stands out as the most memorable animated Thanksgiving program ever created. 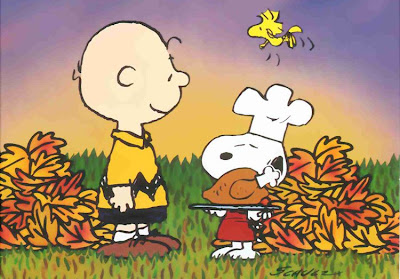 Since 1977, when the show premiered on CBS, we have all enjoyed the exploits of the Peanuts gang as they gather for the annual parent-free feast of popcorn, toast and candy. I've always loved pushy Peppermint Patty and her entourage and how they invade Chuck's holiday meal. Maybe it's because I've known a few people like Patty over the years - but she has always been my favorite Peanuts character. The one disturbing aspect of the show is that Woodstock, clearly a bird, carves and ingests a turkey - therefore becoming a cannibal before our eyes. Yikes! 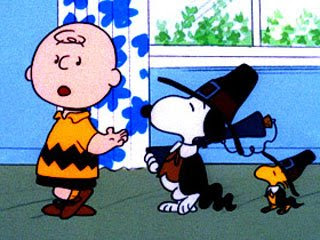 Some other not-so-well-known specials include: THE THANKSGIVING THAT ALMOST WASN'T - not to be confused with THE CHRISTMAS THAT ALMOST WASN'T! This syndicated special first aired in 1972-and hasn't been seen since. It told the tale of Jeremy Squirrel who helped orchestrate the first Thanksgiving feast. Who knew? This special came from the guys over at Hanna-Barbera. 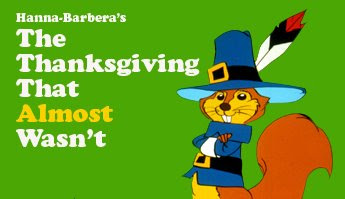 Another critter tale, THE MOUSE ON THE MAYFLOWER was first broadcast in 1968. It's a Rankin-Bass classic that was narrated by Bing Crosby. You can read all about it here. 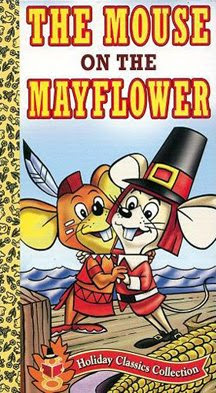 Comic strip cavemen from Before Christ came to life in B.C. THE FIRST THANKSGIVING, which premiered on NBC in 1972. THE FLINTSTONES it's not. You can watch it in three segments here on YouTube. 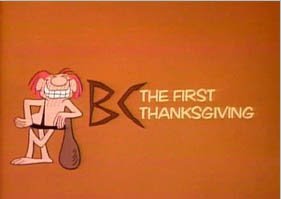 Another comic strip came to TV in 1989. GARFIELD'S THANKSGIVING was one of the sourpuss cat's many CBS specials. I've never been a fan. 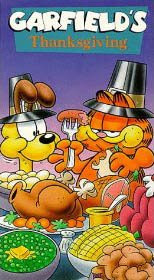 In 1980, NBC aired a compilation of old Warner Bros. cartoons mixed with a new Duck Dodgers episode and called it DAFFY DUCK'S THANKS FOR GIVING.

This was after CBS debuted the similar BUGS BUNNY'S THANKSGIVING DIET a year earlier to big ratings. 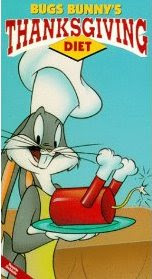 In 1980's THANKSGIVING IN THE LAND OF OZ , Dorothy Gale is carried back to Oz by a green turkey balloon to spend the holiday with her Aunt Em and Uncle Henry, who are moving to a nursing home! Along the way she meets Jack Pumpkinhead, a and Tic Toc, and must battle the evil Tyrone the Terrible Toy Tinkerer. Oh boy! This CBS Special should not be confused with the live action atrocity called THE WONDERFUL LAND OF OZ. 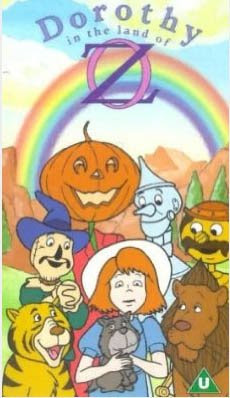 Also, it should not to be confused with 1974's JOURNEY BACK TO OZ, which was a theatrical feature from our friends over at Filmation (that actually took ten years to make it to the big screen). Liza Minnelli takes over her late mom's role and she's joined by such talents as Ethel Merman, Paul Lynde, Milton Berle, Mickey Rooney, Danny Thomas and Margaret Hamilton! With special guest Bill Cosby as the Wiz! (A little Filmation cross-promotion there). It premiered on ABC in 1976. 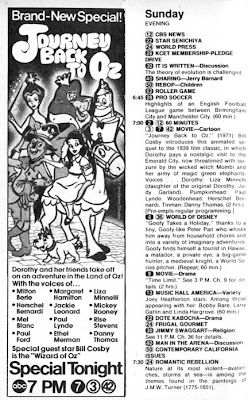 So there you have it - my quick overview of that rare bird, the Thanksgiving special.