In honor of Lucille Ball's 100th birthday, here's a repost. While many people love Lucy Ricardo and her "Ricky...I wanna be in the show" antics and some people prefer Lucy Carmichael and her ongoing battle with Mr. Mooney (Gale Gordon) - I was always drawn to Lucy Carter, the middle-aged widow stuck in a generation gap with her two mod teen-agers. 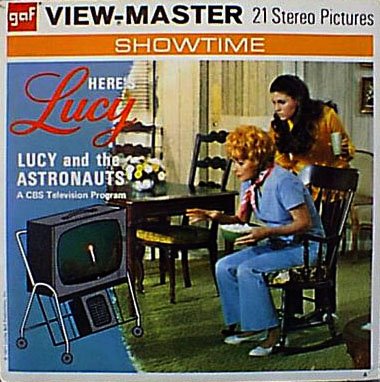 That's right, America. You can keep your I LOVE LUCYs, LUCY-DESI COMEDY HOURs (now syndicated as WE LOVE LUCY) and your LUCY SHOWs, I'm a HERE'S LUCY kinda guy. Yes, I know the first series is an absolute classic and the hour-long follow-up series is quite charming, but the Lucy I grew up with (I was 4 years old when HERE'S LUCY premiered on CBS) will always be my favorite. 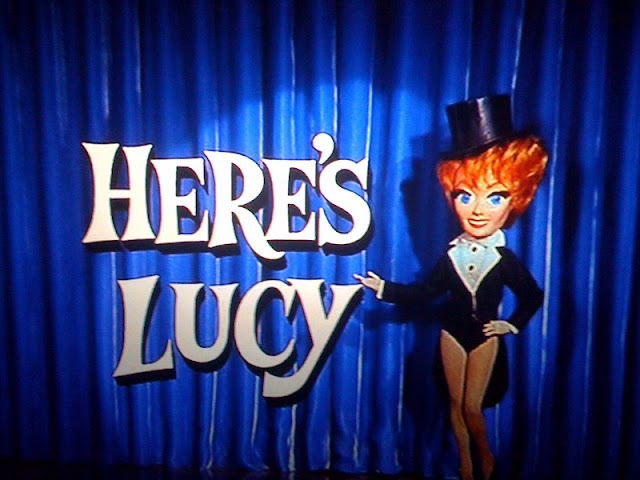 From it's brilliant animated opening sequence to it's ridiculously asinine plots, there's always been something about this version that spoke to me. After the show left CBS in 1974 (when MAUDE took over it's timeslot - something I'm sure made Vera Charles very happy-that's a MAME reference), daytime reruns continued until 1977. Back in those days the 3 networks often reran prime-time comedies as part of their daytime line-ups, usually airing before game shows in the morning or after the soaps in the afternoon. 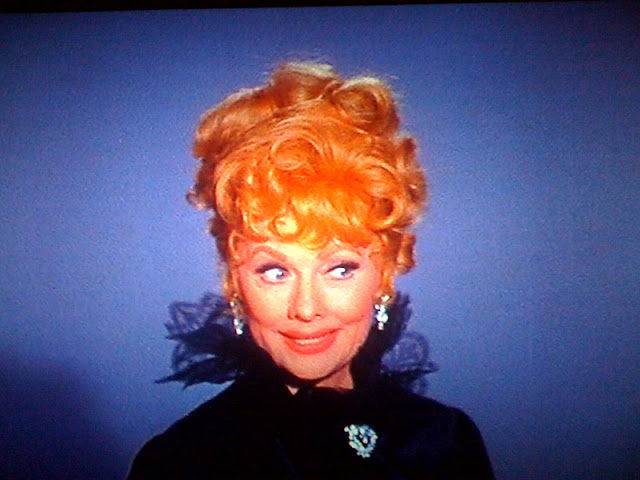 The show was essentially a continuation of THE LUCY SHOW which ran on CBS from 1962 til 1968. THE LUCY SHOW was #2 in the ratings, but Lucille Ball wanted to make some changes. Having recently sold Desllu, Miss Ball set up her own production company and tinkered with the show's format. Lucy Carmichael became Lucy Carter and now lived in Los Angeles and worked for her brother-in-law Harry at the Unique Employment Agency - thereby giving her many opportunities to interact with guest stars (either playing themselves or characters). 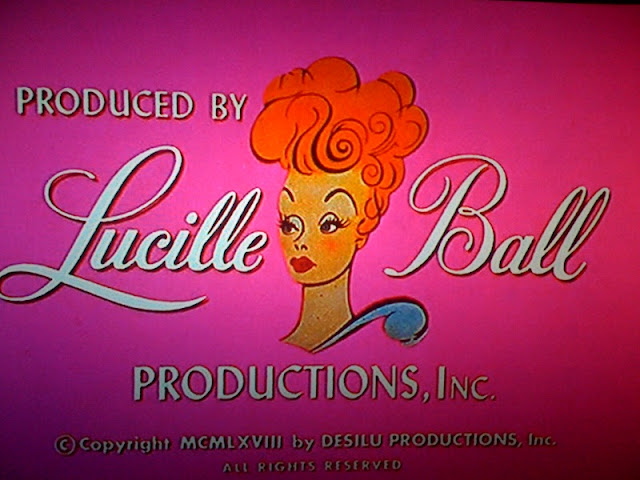 HERE'S LUCY was syndicated in the early 1980s, and in New York it aired back-to-back with the MARY TYLER MOORE show on NBC affiliate WNBC, channel 4 in the 4-5PM slot. Reruns were later relegated to the wee hours of the morning. Often airing at 3 or 4 AM.. After this run, I thought I'd never see the show again. 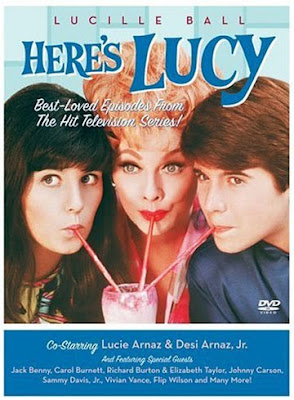 In 2004, Shout! Factory released a 24-episode "best of" set which featured episodes from the series entire run as well as many fun and informative extras. It was great to see Lucy Carter, her kids Kim (Lucie Arnaz) and Craig (Desi Arnaz Jr.) again along with their cantankerous Uncle Harry (again, the usually over-the-top Gale Gordon) and the cavalcade of guest stars that parade through Lucy Carter's living room. This collection kept me wanting more, but it seemed like Shout! Factory didn't plan on following up with any further releases, so I had to suffice with my memories of the rest of the series' episodes. 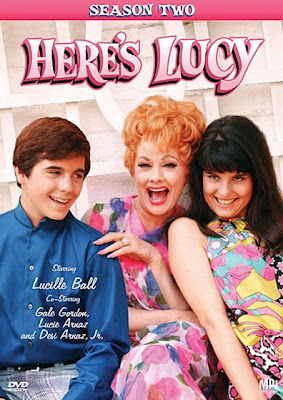 Later MPI gained the rights to the series and began putting the show out in season sets. 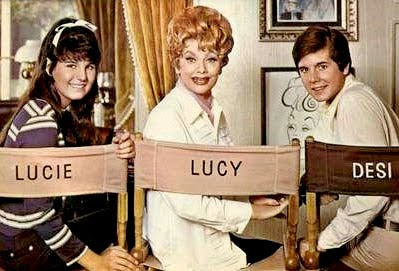 In many ways, HERE'S LUCY was a bridge between the innocent sitcoms of the 50s and 60s and the youth-oriented shows of the early 70s. Having her talented teens on board for the series gave the show plenty of reasons to invoke references to pop music of the day and other youth-oriented fads and trends. In the first 20 episodes, there have been at least three references to spies and/or secret agents. 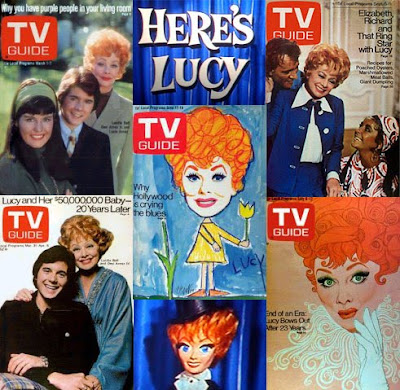 You have to hand it to Lucy. She found a way to keep her show fresh, but yet familiar enough to not scare away her loyal fans who still tuned in for her hilarious hijinks and predictable pratfalls. Ms. Ball was 57 when the series began and was supposedly playing a character in her 40s. There's even a joke in one episode referring to the actress in YOURS, MINE & OURS (played by Lucy) being too young to cast opposite Henry Fonda. Yes, Lucy was a bit long-in-the-tooth to be doing some of the same schtick she had been doing almost 20 years earlier, but the gal had spunk. Though the character Lucy Carter can sometimes be exasperating and shrill, the show is somehow comforting. I'm not sure if it's the garish mustard furniture in Lucy's home or the well-place antique props in Uncle Harry's office, but the detail to production design was something that I remembered noticing even as a child. 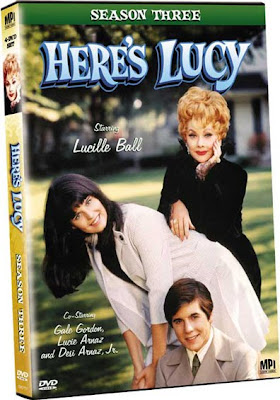 Episode #18, filmed entirely on location at Los Angeles Airport, is a standout because it looks like a short film rather than a typical sitcom episode. Now if someone would only put LIFE WITH LUCY out on DVD! For more Lucy fun, check out STONE PILLOW.
Posted by Doug at 12:01 AM

I totally want to get together with you on a play date in your garage where we can make-believe we are the casts of Rhoda (I'll even be Brenda!), Here's Lucy, Partridge Family, Brady Bunch, and HR Pufinstuf.

I'll even provide the Koolaid and vegan rice krispie treats.

Laura - that sounds like heaven. If we could only turn back time... :)

OMG - I actually owned this as a kid - thanks for the memory jog!

As a child, I was really confused as to why Lucy's surname had changed and Mr. Mooney was now a different character. It was disturbing.