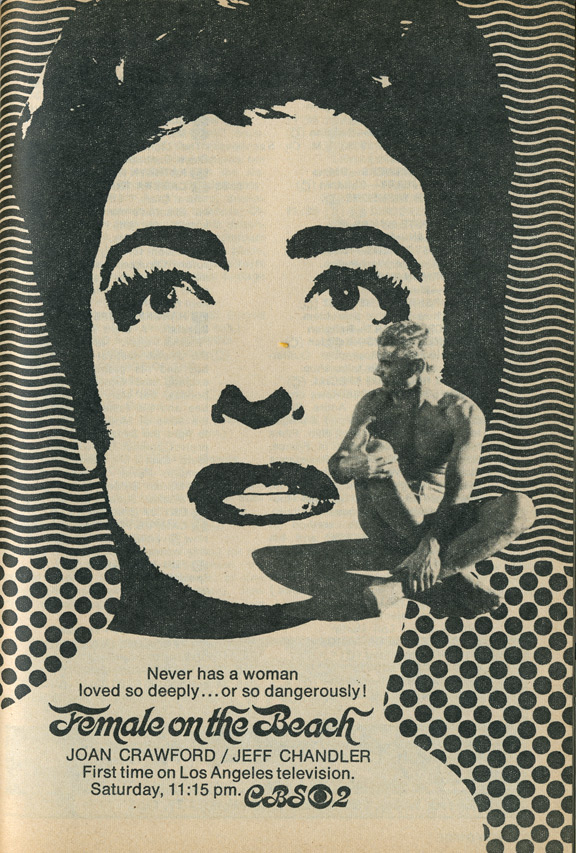 Wow! Talk about Pop Art - this Warhol/Lichtenstein mash-up is a wild way to promote a 1955 sudser starring Joan Crawford as a cougar and Jeff Chandler as her younger beach bum boyfriend. It's "GIDGET in a girdle" as 50-year old Crawford romances 37-year old Chandler. The designer of this awesome ad also chose a font that paid homage to Joan Crawford's role as a member of the board of directors of Pepsi Cola. Jeff Chandler was an up and coming leading man who transitioned from western roles to straight drama, all while headlining in Las Vegas as a song and dance man. Esther Williams claims that the married actor and her had an torrid affair, but she called it off when she found out he had a thing for wearing womens' clothing. Sadly Chandler would die only 6 years later after making FEMALE ON THE BEACH after a botched back surgery.
Posted by Doug at 12:01 AM

I can see the image...hmmm, that's odd. Is Joan's ghost haunting my blog?

I believe there are many ghosts haunting your blog. Check the site on someone else's puter, I still can't see the image. :'(

Re-imported the image. Hope it shows up now.

"Gidget in a Girdle" is a CLASSIC and vividly hilarious description of this movie! Your site is terrific. Like a TV and movie history museum.