Over its 35 years on NBC, ANOTHER WORLD was occasionally promoted by the network. Here is a collection of TV Guide print advertisements that appeared during the 1980s and 1990s. 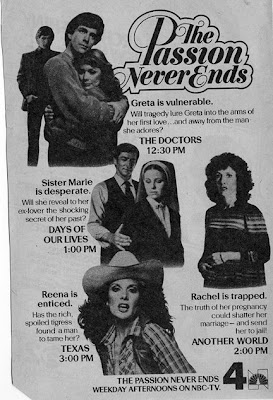 The Passion Never Ends was NBC's tagline for its daytime line-up back in the early 80s. Of the 4 soaps featured in these ads, only one, DAYS OF OUR LIVES is still airing on the network. In fact, DAYS is the last soap standing on the peacock network. AW's heroine Rachel Cory (Victoria Wyndham) is trapped! She is married to powerful publishing magnate Mac Cory - but pregnant with the child of sexy con-man Mitch Blake (William Gray Espy)! 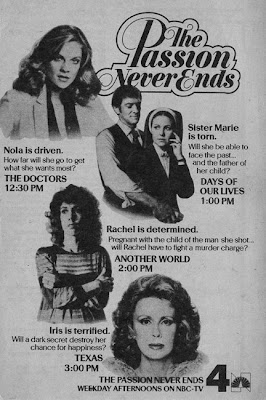 Apparently things have gone from bad to worse for Rachel as now Mitch has been shot - and she could now be charged with his murder. Spoiler: He didn't die, he just left the show and came back years to be reunited with his teen-age son Matt. Notice Mac Cory's daughter Iris Wheeler (Beverly McKinsey) in the ad for her short-lived spin-off series TEXAS. 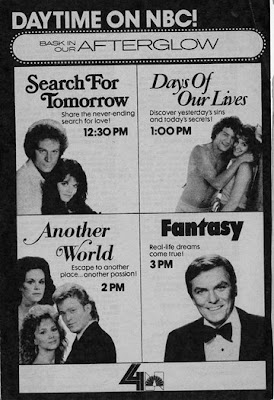 Bask in our Afterglow. THE DOCTORS and TEXAS are now gone - replaced by SEARCH FOR TOMORROW (transplanted from CBS) and the early reality show called FANTASY (hosted by the odd trio of Peter Marshall, Leslie Uggams and Glen Scarpelli!). ANOTHER WORLD was deep into the love triangle between Mac Cory's son Sandy (Chris Rich), his wife Blaine Ewing (Laura Malone) and the brilliantly conniving Cecile DePoulignac (Nancy Frangione). It was around this time that Cecile hired Alma Rudder (the chilling Elizabeth Franz), a crazed mountain woman to kidnap and poison Blaine AND to dress up as a giant Raggedy Ann doll and torment poor Blaine. It was pure genius! 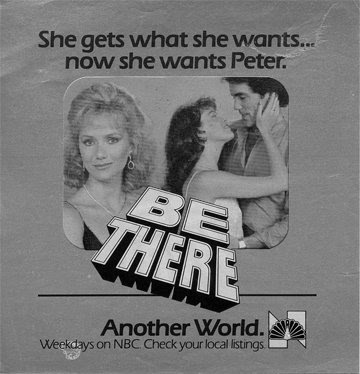 Cecile's best friend Donna Love (Anna Stuart) didn't like the fact that her brother Peter (John Hutton) was going to marry the very common Sally Frame (Mary Page Keller), so Donna employed Cecile to break up the romance between them. It worked. :) 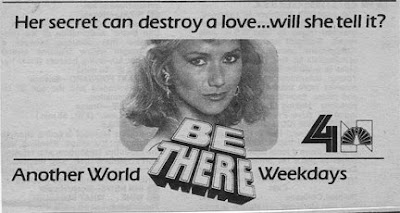 Ah, Cecile strikes again! Have I mentioned how she is my all-time favorite AW character? Followed closely by Donna Love. Nancy Frangione and Anna Stuart were incredible whenever they shared screen time. It was always a bitchfest royale! 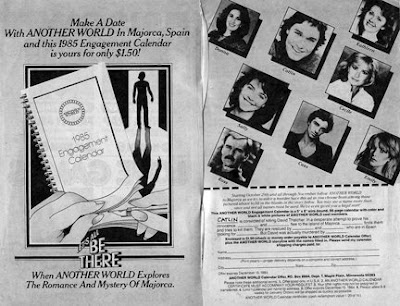 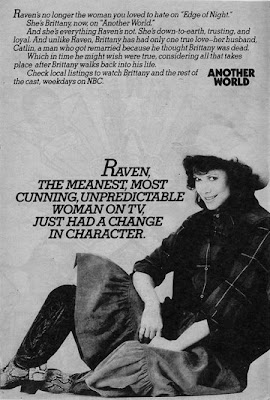 Sally Frame, who was dumped by Peter Love eventually fell in love with Catlin Ewing. The two became a super-couple and were well on their way to the altar. Unfortunately Catlin's dead wife Brittany Peterson decided to show up. Played by EDGE OF NIGHT's Sharon Gabet - Brittany was left deaf mute after a boating accident. Gabet's performance was amazing. 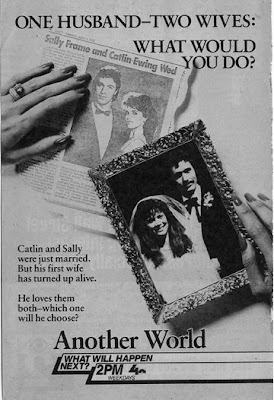 Catlin was torn between Sally and Brittany. He eventually chose Sally and Brittany ended up with Peter Love! (see above). Unfortunately Peter (now played by Marcus Smythe) evolved into a villain in the tradition of his father Reginald (John Considine) and ended up on the wrong side of Brittany's shotgun. 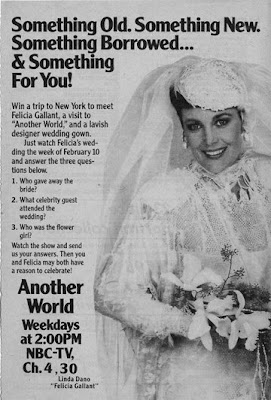 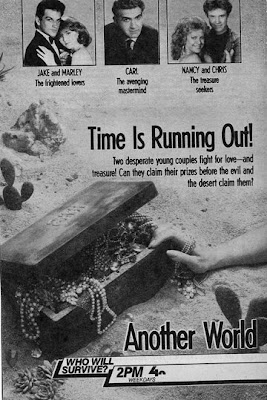 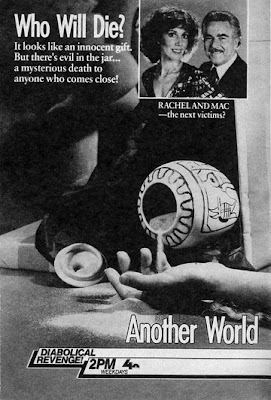 As a result of Carl's machinations, a jar of poisoned dust travelled throughout Bay City killing off some minor characters. 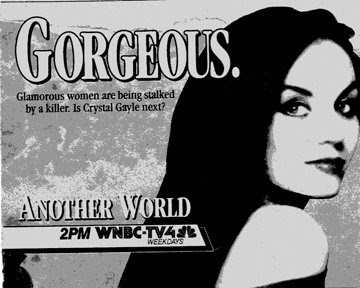 The Sin Stalker came to Bay City and killed off a bunch of beloved minor characters like Maisie the waitress and glamorous architect Quinn Harding (Petronia Paley). Crystal Gayle managed to survive though - and got to perform the new theme song. 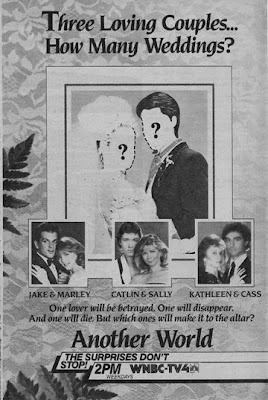 One will be betrayed. One will disappear, One will die. Jake and Marley broke up thanks to Marley's twin Victoria; Catlin became a widower when Sally (now played by ALL MY CHILDREN transplant Taylor Miller) was killed by Carl Hutchins; Kathleen disappeared and Cass set to to find her. Carl Hutchins eventually tried to kill her too. 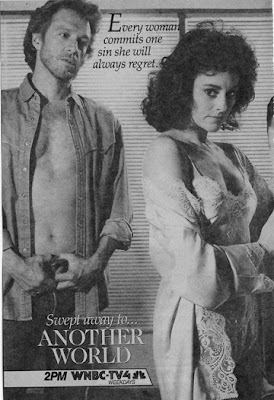 Donna Love (now played by Philece Sampler, who was an amazing Renee DiMera on DAYS) was swept away again by her former stable boy Michael Hudson (Kale Brown)-but an affair with his Viet Nam vet brother John (David Forsyth) put an end to their happiness. 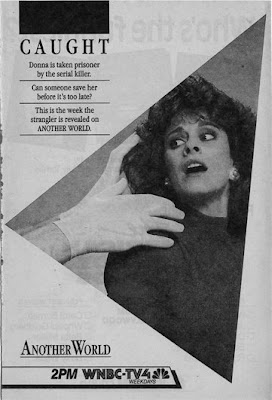 Another serial killer tormented Bay City. I'm not sure if this was Dr. Alan Glaser or Dr. Fax Newman, in fact Dr. Bailey Thompson and Dr. Taylor Benson were also twisted. One raped Sharlene Frame (Anna Holbrook) when she was a child, the other tried to kill her with an exploding boat. Bay City had its share of crazed doctors. 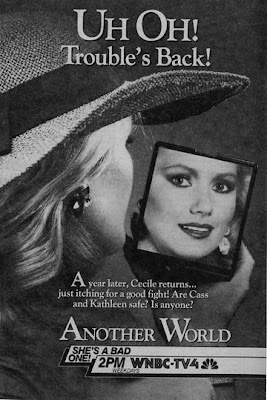 Yay! Cecile's back! The producers would convince Nancy to come back to the show every few years to spice things up- and it always worked. Especially when teamed with Cass Wintrop. 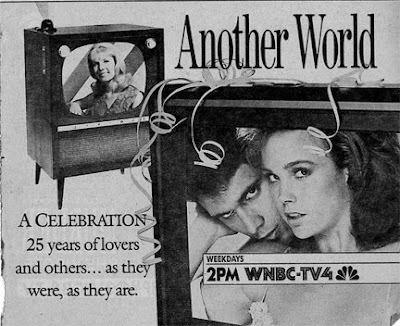 Two two "hosted" 2 special episodes that examined the changing rules of romance and sex in the 1990s. 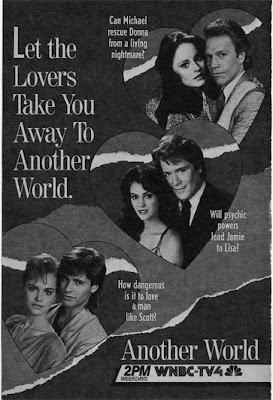 I'm not sure if this ad in in the right order, but whatever. Here we have Michael Hudson and Donna Love (notice Philece's head on Anna Stuart's body); Lisa Grady (Felicia's neice, played by Joanna Going) and Jamie Frame (Rachel's son, now played by ALL MY CHILDREN vet Larry Lau); and Cheryl McKinnon (Kathleen's baby sister played by Kristen Marie) and my favorite AW hunk ever Scott LaSalle (the son of Reginald Love, played by Hank Cheyne). 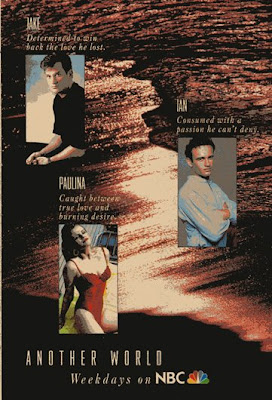 The final ad for ANOTHER WORLD - Jake McKinnon is determined to win back Paulina Cory (Mac Cory's daughter, played by the stunning and talented Judi Evans) from Ian Rain (Julian McMahon in his pre-NIP/TUCK days).

They weren't quite in order, Doug, but they're all on there! The answer to your question with the 'Caught' ad with Donna/Philece, that was the Sin Stalker, Alan Glaser. Those other sickos you listed there all came later. I'm almost surprised there were this many TV Guide AW ads, as sparing as NBC was with promoting AW over the years.

Thanks for the info, If I had more time I would have figured out the exact order of the ads. I can fix 'em if you know the right chronology.

What a terrific and loving tribute to Another World. It is even more timely that is coincides with not only the show's 45th anniversary, but also the launch of anotherworldtoday.com

One tiny edit to make to your very thorough history. The character of Katheleen did not die at the hands of then-evildoer Carl Hutchins. Everyone thought she had died, but it turned out she went into the witness protection program.

One of Cass' later loves, Frankie Frame, was killed at the hands of a serial killer in a totally useless storyline. Viewers were horrified at the brutal on-screen death and tuned out in droves. The show never recovered.