From 2009, and in honor of Judy Garland's 90th birthday, I proudly re-present one of my most popular blog entires..."Confetti" or "When Wonder Woman Met Judy Garland".  Yes - that's right - for two issues (226 and 227 of her original series) Woman Woman, everybody's favorite Amazon got to pal around with a dead ringer for Judy Garland, everyone's favorite tragic songbird! 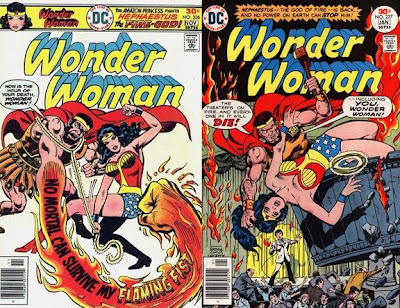 Courtesy of writer Martin Pasko and artists Jose Delbo and Vince Colletta, this epic meeting of two gay icons could only be rivaled by the year Comic Con and San Diego Pride occurred on the same weekend! The sad story goes like this...singer actress Julie Gabriel is infamous for being late to movie sets and for throwing temper tamtrums–but somehow the people, the fans still love her. Sound familiar? 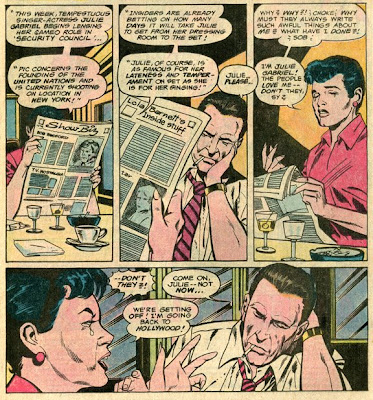 Her put-upon husband/manager tries to talk her out of quitting her latest gig–a film about the United Nations. She shows him who's boss by downing some pills! Oh no, Julie!!! 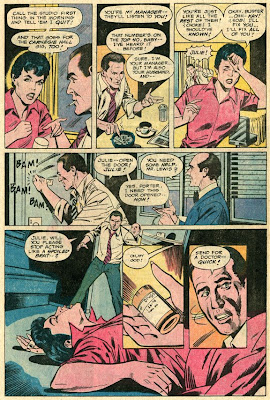 After evil fire god Hephaestus (the guy with the flaming fist pictured on the cover of Issue 226) causes chaos on the film set, Wonder Woman shows up and saves the day! Afterwards in her secret identity of U.N. representive Diana Prince, she makes friends with Julie, who invites her for a drink. Suffering Sappho!!! 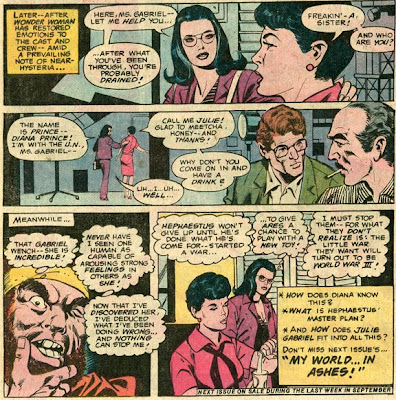 After a cliffhanger, things pick up in the very next issue as Julie rehearses for her big night at Carnegie Hall with her gay choreographer. 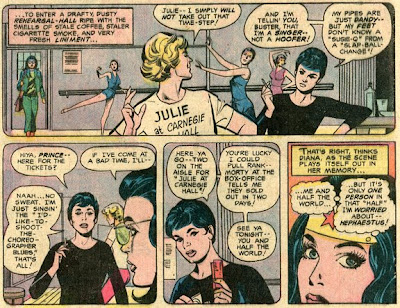 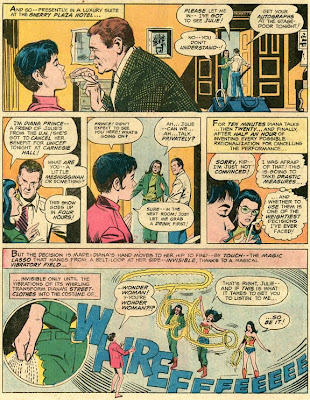 Diana when pays Julie a surprise visit before her show, she gets accused of being "a little meshugginah"! Then she transforms into WW before Julie's eyes! Oh no, anytime Diana reveals her secret identity to someone, trouble follows!!! 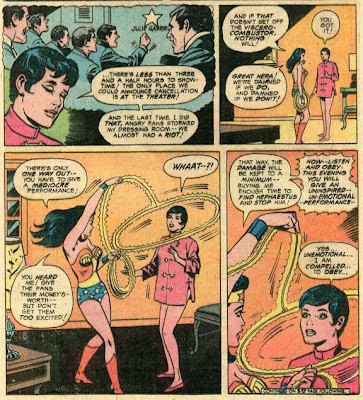 I'm not sure if Julie is wearing pants in these scenes as WW compels Julie to give a mediorce performance! Great Hera!!! 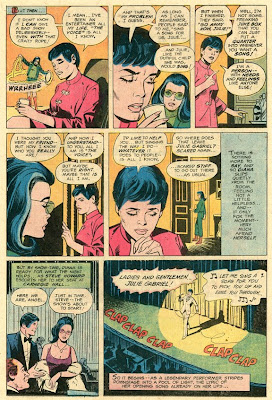 And then the big show begins. 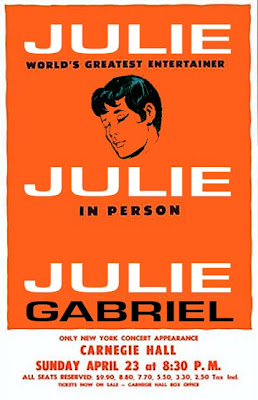 Diana takes Steve Howard as her date (He's really Steve Trevor, who was recently brought back to life by the gods). JULIE! JULIE! JULIE! 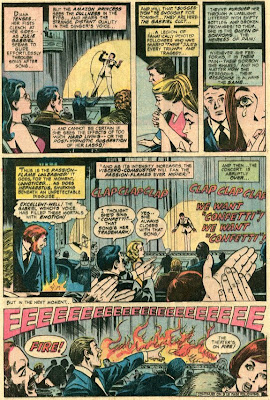 Despite Diana's spell, Julie's fans love her just the same, and they begin to clamor for her to sing her signature tune, "Confetti"...but soon the stage catches on fire thanks to old cranky Hephaestus! 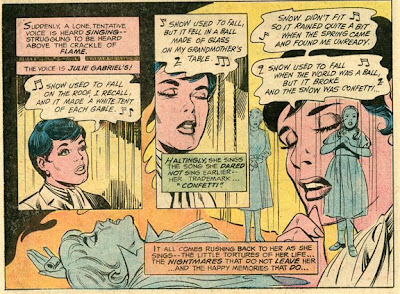 So, as the crowd cheers and screams in horror–Julie gives the performance of her career as the theater burns to a crisp around her! 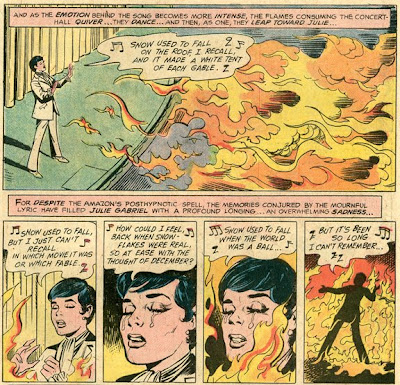 "Confetti" concludes, Hephaestus is captured by WW and poor Julie is reduced to a pile of ashes. 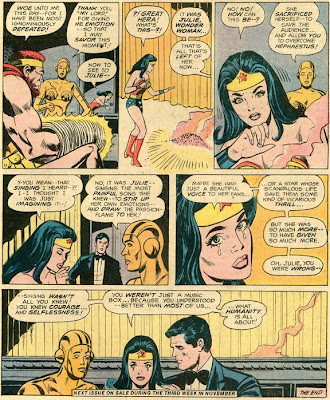 The End. Too bad Julie didn't rise from the dead during BLACKEST NIGHT.
Posted by Doug at 12:00 PM

Wow, it's the flippin' Holy Grail of camp comics! Thank you so much for posting this - I was not even aware of this...it's just so damn great, on so many levels.

Julie Gabriel died for her fans.

Genius! Thanks for sharing!

I'm not sure why but I love that artwork style from that period. Not so much re: Wondy's costume though.

I can't believe I didn't know about this. Genius!

I was not aware of this groovy highpoint in comic book history either. Judy/Julie meets Wonder Woman, who would've thought! It's a shame poor Julie had to perish in the end, but it's still a fabulous story. I wonder if Judy was aware of her comic book persona--maybe Little Joe or Lorna let her know. Thanks for sharing, Doug!

Unfortunately the real Judy was already ashes by the time this story was published in the mid 1970s.

I always loved this story. So sweet. :) Those Wonder Woman writers were really in-touch with their audience at that time. : ) I loved the Steve Howard period. It was SOOO GOOD!

OMG! love the Julie @ Carnegie Hall poster! This makes me want to post the Lois Lane story "Black Like Lois" in which Lois gets a black-over and goes undercover for a story on racism in America!

Love it! I have both these issues but never read them all the way through.

Julie must be wearing her daughter Lisa's white pantsuit from "Lisa with an S."

FINALLY! I was wondering when you would, for a minute there I thought you managed to let this slip past you.