back in 2009, I watched a crime thriller called PORTRAIT IN BLACK (1960, directed by Michael Gordon). 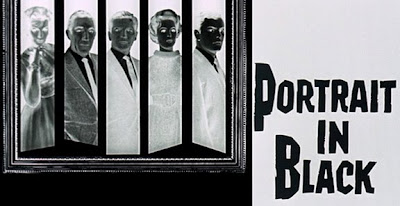 Produced in the patented glossy Ross Hunter mold, this stylish soft focus sudser starred Lana Turner (dressed to the nines in stunning Jean Louis outfits) as Sheila Cabot, as a beautiful San Francisco socialite who cares for her cruel, but ailing husband (played by Lloyd Nolan), a millionaire mogul. Sheila longs to free of her husband, but not his enormous, um fortune. 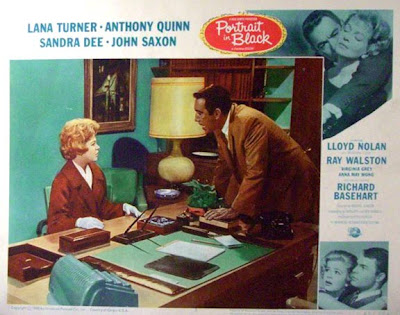 Enter Dr. David Rivera (played by Dr. Anthony Quinn, medicine man), who is hired to be Mr. Cabot's personal physician. The good doctor and the beleaguered wife find solace in each other's arms, becoming involved in a torrid affair. 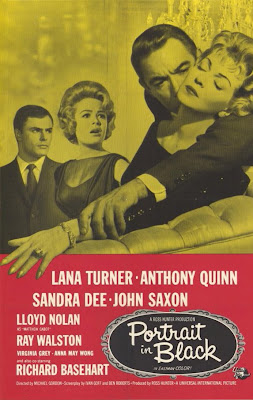 Suddenly Mr. Cabot dies from poisoning (!) and there is an ensuing murder investigation that seems to damper any hope of happiness the couple may have. Then Sheila receives an anonymous letter detailing that someone knows about the crime and implicates her and Dr. Rivera! 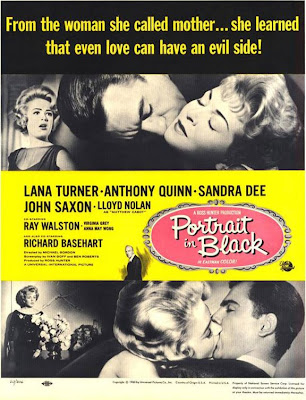 Sheila is convinced that her late husband's financial advisor is blackmailing her, and she and the dirty doc set out to find him, but soon he turns up dead as well. Guilt and suspicion get the best of the lovers and one decides to confesses! But which one? 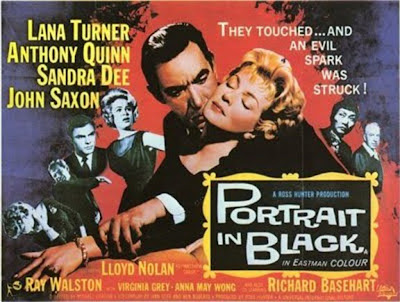 The film also stars Sandra Dee, John Saxon and Richard Basehart and veteran actress Anna May Wong (in her last film role). Overall, not a great film nor a over-the-top campfest, but an enjoyable melodrama. I've give it a 6 out of 10.
Posted by Doug at 5:17 PM