Here's a mini-review from 2008 of a Curtis Harrington thriller, with a title that always brings to mind the great Shelby Lynne song from BRIDGET JONES' DIARY (see video below the review). 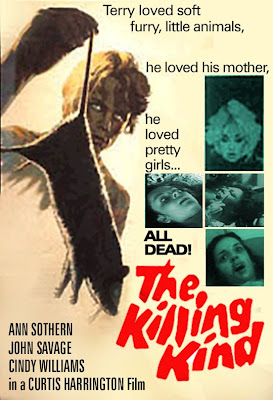 THE KILLING KIND (1973, directed by Curtis Harrington) opens as 17-year old Terry Lambert (John Savage of HAIR) is forced to take part in a gang-rape on the beach - two years later he's released from prison and returns to the Hollywood boarding house for old ladies, run by his overly affectionate mother Thelma (Ann Sothern of THE MANITOU). The biddies think that Terry's been volunteering for the Peace Corps. 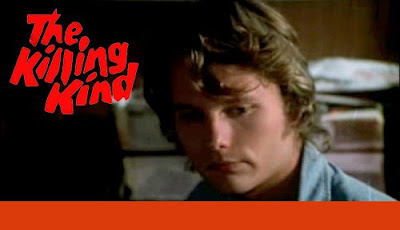 Terry spends much of his time in his tighty-whities or in a floral-print Speedo, but you know Terry's not right when he kisses his mom on the lips and then strangles one of her cats while spying on new tenant Lori (Cindy Williams of LAVERNE & SHIRLEY). At the same time, Terry is being stalked by a mousy, nosy neighbor named Louise (Luana Anders of  THE MANIPULATOR) who lives with her crippled father. We soon learn that Looney Louise wants to act out her fucked-up rape fantasies with him. Terry then starts prank phone calling his rape victim Tina (Sue Bernard of FASTER PUSSYCAT, KILL KILL) - eventually driving her off the road to her death. Next he pays a visit to the woman lawyer who put him behind bars (Ruth Roman) and drowns her in her own booze. There's also particularly grisly scene involving a rat, a poolside freak-out involving his guitar and a two scenes involving Cindy Williams and drowning. 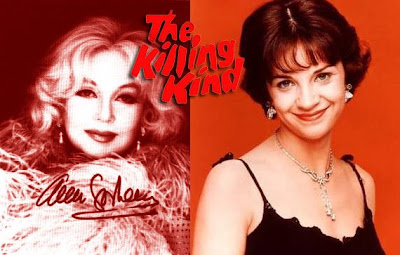 What starts out fun and interesting becomes a bit boring about half-way thru. It doesn't feel like there's enough plot to sustain interest. The cast is a mixed bag. Savage is so likable, you almost forgive him for being a psycho - after all he was practically violated himself in the opening rape scene and then made to be the fall guy, as if it had been his idea. Ann Sothern is deliciously over-the-top as hot momma Thelma, and looks like she's having the time of her life. Ruth Roman is a hoot in her brief scene. Cindy Williams, on the other hand, seems uncomfortable and miscast as an aspiring model. Luana Anders is enjoyable, but her character and plotline is extraneous.

I'll give THE KILLING KIND a 7 outta 10. The dvd has a cool interview with the director, who passed away in 2007. Fans of this should check out Harrington's HOW AWFUL ABOUT ALLAN and the previously reviewed POOR PRETTY EDDIE.